What is it about hummingbirds that get our attention? Is it that unique buzzing sound, known as a “wing whistle?” Or is it the magnificent color on their throat or back? Maybe it is how fast they fly as the dance with their other hummingbird friends. Whatever it is, they do fascinate me.

I remember as a little girl my mother telling me that hummingbirds never stop. I believed her, she was my mom. She got that one wrong. Those wings beat 60 to 200 times per second. So naturally they “park” regularly just to take a break.

Did you know that a hummingbird takes in nectar with their tongue? Or, did you think they just stuck their beaks into a flower petal and that’s how they enjoyed their nectar? That’s what I thought, until my friend Nick, rescued a hummingbird that was drowning in a bowl of water that he had set out for his dog.

He brought that suffering bird into the house and assembled a perch made with a skewer balanced on two tiny jelly jars from a local restaurant. 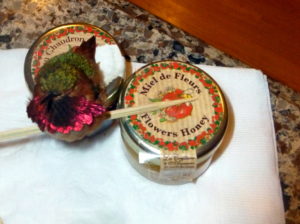 Then he opened up its beak with a switch blade knife ever so carefully. The tongue that was just hanging out was able to retract. My hero!! But now what…well of course…nourishment, who knew, well beside Nick? A tiny drop of honey mixed with a few drops of water in a teaspoon and a stick.

Slowly and methodically Nick dipped the stick into the honey water and then on the beak of this green beauty; eyes mostly closed sitting on its perch. Over the next 10 minutes, this little buzzer was coming back to life. 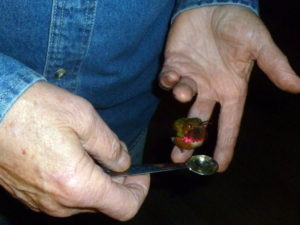 I said, “Now what Nick? You aren’t going to just let it fly around the house are you?” Nope…outside we went, bird in hand…I am feeling a total Dr. Doolittle moment here. 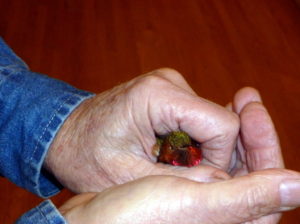 I asked him how he even knew what to do. He said he remembered when he rescued a hummingbird in the road when he was a Marine. Really, Nick…they taught you that in boot camp?

What happened to the hummingbird? It eventually flew up in the awning over the deck…and the rest is history. 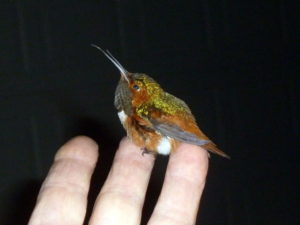 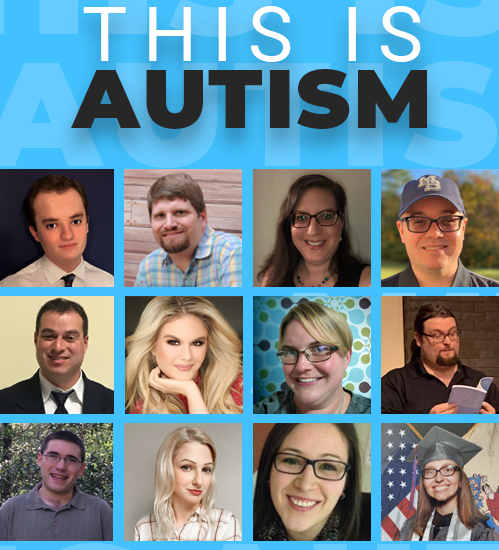