Have you ever started a habit that morphs into more than you expected? Such is the case of my wild birds. They have become a part of my morning ritual. It started many years ago with peanuts for the beautiful noisy scrub jays, not to be confused with blue jays. I swear they heard me walk outside anticipating peanuts in a shell. 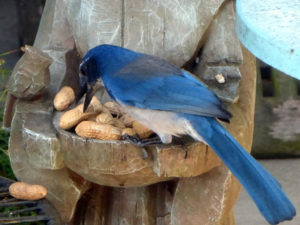 Did they eat all those peanuts? Well not exactly. They were more interested in selecting the perfect shell and then they were off to the neighbor’s yard, where they buried their treasures for later. For variety they nibble on the bird seed as well. 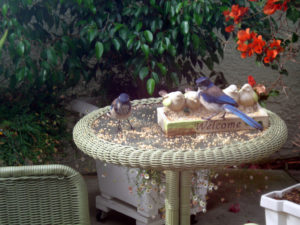 Then the squirrel arrived. We called her Mrs. Sylvia. Don’t ask, I have no idea why. Over time Mrs. Sylvia brought her family. They also hear the sliding door open in the morning, announcing the peanuts. But they also eat all the sunflower seeds in the bowl. And then discard the shells everywhere. Sweeping is a part of my morning exercise. 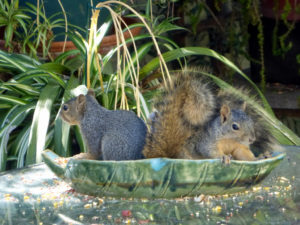 But what came next was the expanded morning ritual with wild bird seed for my additional friends to the yard. That started small too, first a little seed tray that attracted the sparrows and wrens, then the morning doves and in a separate location the thistle for the finches. 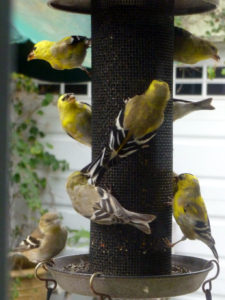 Let me not forget the crows, now part of the ever expanding group. They wait on the phone lines, better known as large bird perches. 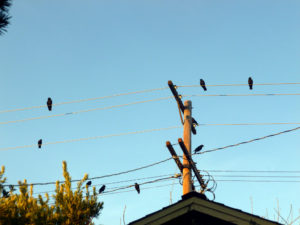 In developing this blog I’ve learned a few things. One, I am pretty darn good at a fragmented sentence. Two, I have a million bird pictures and they don’t need to go into one blog. Three, the title and bird/squirrel pictures I have “landed” on for this blog has been a work in progress.

While I started with a plan, I scraped it in favor of keeping it simple. After all, Wednesday is just a couple of days away and I have much more to say about these creatures that fly and scamper through my yard each day. Here’s a taste of what’s to come: Who Invited the Pigeon?

Maybe next week I will introduce you to the yard menace, not the little mice and tree rats, because they come around as well. But rather the Cooper Hawk. And according to the green line, that my friends was a fragmented sentence!!!

Just to mix it up a bit, I may have to talk or in this case write, about food. Who doesn’t enjoy a great meal, especially if someone else is fixing it and washing the dishes afterwards?! Stay tuned to Born to Talk! I’ll be back on Wednesday.

Its a Small World After All 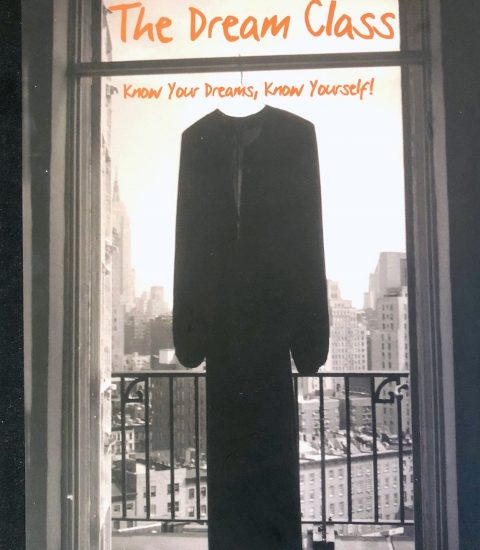 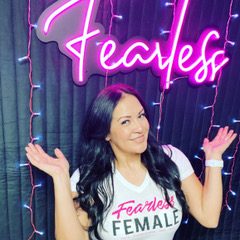